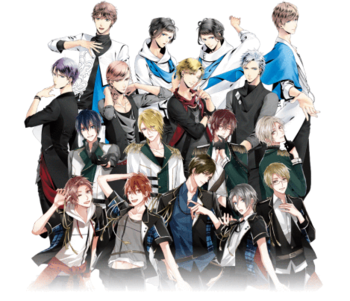 Tsukipro is a franchise consisting of albums, drama CDs, mobile games, anime, and stage plays featuring 13 fictional idol groups - 10 male, 2 female, and 1 mixed - under Tsukino Talent Productions. The series exists in 2.5 dimensions, as the characters of the series themselves are made to interact with producers and other people in real life. The franchise started with Tsukiuta, a collaboration between voice actors and Vocaloid producers.

The franchise is divided into parts:

There are also two live action movies about SOARA.

A mobile Rhythm Game,Tsukino Paradise, was in service from 2017-2020. A character collecting game called Tsukino Park ran from 2015-2019, when it was replaced with an app called Tsukino World.

All groups show examples of:

Tropes applying to Tsukipro the Animation: