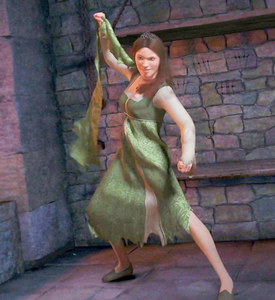 "Great for dancing, not so much for cross-country."
— Abby Maitland, Primeval
Advertisement:

Action Girl Alice enjoys getting dressed up for the night, but alas, the one time she puts on the polish, she will find herself in combat. Needless to say, Alice can't fight while wearing a tight-fitting top and a voluminous skirt that hinders the motion of her legs, but there's no time to change and modesty restrains her from just taking the whole thing off. So she grabs a knife off the nearest carving station and tears her beautiful clothes (usually by raising the hem or cutting a slit in the side) so that she can move freely. If she really means business, she'll ditch the high heels too, though not always.

Some Fanservice occurs, as this is a combination of Clothing Damage and She's Got Legs.

A minor form of Battle Strip.

While fighting a brainwashed Meme, Anya rips off most of her dress to improve her range of motion.

While fighting a brainwashed Meme, Anya rips off most of her dress to improve her range of motion.