Video Game / Kingdom of the Dead 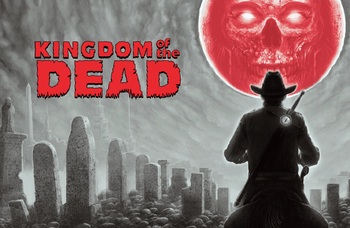 Kingdom of the Dead is an indie First-Person Shooter by Dirigo Games (one-man developer Philip Willey), made in Unity and released on Steam on February 10th, 2022. The game is inspired by older shooters such as Doom, GoldenEye, and Blood. The game is most notable for its black-and-white hand-drawn art style, with every texture having been hand-drawn by the developer (inspired by old EC Comics), giving the game an appearance similar to old Apple Macintosh adventure games such as those by ICOM Simulations or the 2014 game Betrayer.

The game takes place in the late 19th Century, with players taking the role of Agent Chamberlain, the Army General of "the Bureau"/"Project GATEKEEPER", a group dedicated to thwarting the Grim Reaper's attempt to take over the human world with his army of the dead. Chamberlain's reluctant ally is a magic demonic sword named Sitis, which has the power to close the Gates that the Grim Reaper uses to bring his forces to Earth.

Kingdom of the Dead provides examples of: