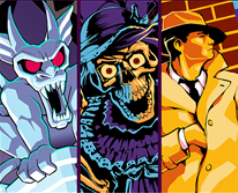 Get ready to die. A lot.
Advertisement:

The MacVenture games are an Adventure Game series by ICOM Simulations. These games are known for their characteristic interface, with one window showing graphics in first-person view, one window showing the inventory, one window displaying text, and eight command buttons like EXAMINE, TAKE, CONSUME (what the commands are depends on the version).

The Sword of Hope (the original, 1989, and the sequel, 1992) were developed by Kemco, who published the NES versions, and have a similar interface, but are not considered part of the MacVenture line. There have also been several games inspired by the series, including a trilogy by GrahfMetal (Infested, 2016, Spectacle, 2020, and Themeire, TBA), Keineged an nor (July 2018), and From Beyond Prologue (December 2018).