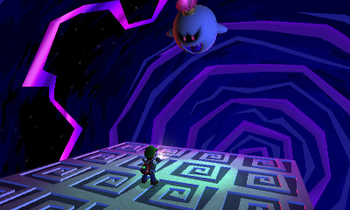 "Going to some other dimension to fight a final battle is such a cliche!"
— Xiaomu, Super Robot Wars OG Saga: Endless Frontier
Advertisement:

You're off to fight the Final Boss, so you end up having to go to another dimension. A Video Game trope, probably caused because the developers want it to be memorable, impressive, and/or awesome. May very well have an Amazing Technicolor Battlefield or be a High-Altitude Battle. It might also come with a Surreal Theme Tune. The main thing, however, is that it's in its own dimension, universe, or whatever. Fighting the boss in a different time period also counts. May also be applied to Bonus Bosses, even though they're not the final boss. A common part of Trippy Finale Syndrome, it is usually to be found in The Very Definitely Final Dungeon. Depending on the characteristics of the new dimension, it may or may not invoke Interesting Situation Duel. Sister trope to Amazing Technicolor Battlefield.

A particularly common variant involves going To Hell and Back, usually to defeat a baddie planning to unleash Hell on Earth.