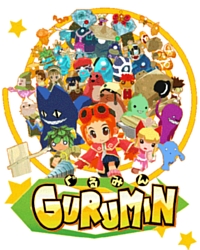 Gurumin is a 3D Action Role-Playing Game made by Falcom for the PC, that was later ported to the PSP. The gameplay makes you go through several dungeon-like levels to retrieve a semi-important plot item at the end, at which point you fight a boss in an often tiny arena and save an NPC. Rinse and repeat until the end. Due to this simplistic nature and the kiddy look every character sports, you would think reviews for this thing would be less than... stellar? Well... that was not the case. It has a something that makes everyone love it, because it does not try to be what it's not: what it does, it does well. It may be easy, cliched, rather short (many people finish their first runthrough at 20 hours) and cartoony, but has a certain charm which makes people come back for more. And featuring FIVE unlockable difficulty levels, four of which are mandatory to get 100% Completion, you will be enjoying this cute, kiddy heroine's adventures for a while. Wait, what? You said heroine?
Advertisement:

Parin is a pigtailed red-headed 12 year old girl who moves to the mining town of Tiese where her grandfather lives, while her parents are abroad. Her stay promises to be a boring one, as there are no other children her age in such town. Or are they? Shortly after unpacking she has to save a mysterious little kid from a ferocious beast (read: a dog) with her 'Pretty Missile Kick' and discovers she's a monster! Oh, but this world's monsters are friendly, you see. She takes Parin through a hole and arrives at Monster Village, which is in disarray because of the Phantoms, a race who lost its home at some time in the past, decided to invade them. It's up to Parin to wield the fabled Legendary Drill, once used agaisnt a forgotten menace, to rid Monster Village from its enemies!

The game is available in English, published by Mastiff, on PSP, as well as on Windows PC via GOG and Steam. In 2016, the game was also remade for the 3DS under the title Gurumin 3D: A Monstrous Adventure.