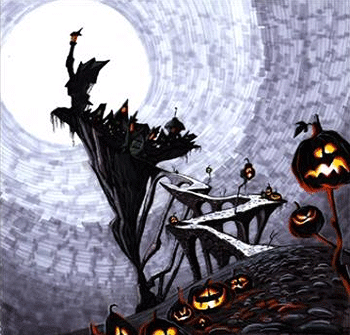 Boys and girls of every age
Wouldn't you like to see something strange?
Come with us and you will see
This, our town of Halloween...

This is a setting with a creepy motif. The buildings are Gothic in design (often clearly modeled on The Cabinet of Dr. Caligari or other examples of German Expressionism), there's always a heavy fog in the air that obscures your vision, the trees sport twisted faces and reaching, claw-like branches, and the full moon always lights the cloud-draped sky... even at 2:30 in the afternoon. Halloweentown is usually inhabited by the usual assortment of horror trope creatures. The main color schemes are black, gray, orange, red, slimy green, and on a few occasions purple. You'll often see them in combination.

Despite the somber colors and the Horror Trope decor, this setting is not always played solemnlynote It's their job but they're not mean, in the town of Halloween. Imagine the Perky Goth or Nightmare Fetishist character as a setting, and you've got this place. It's less Eastern European and more trick or treat. Halloweentown is usually not that scary, at least not intentionally so. It's intended to be somewhat playful and fun. A good way to tell if a series is set in a place like this is if there are jack-o'-lanterns and it's not actually Halloween, although that's not a prerequisite.

A very popular video game setting. If the main characters are visiting this location during Halloween, them being in costume (whether they fit the Halloween theme or are references to other works) is optional.

Contrast with Überwald and Lovecraft Country, much more serious and much less funnote despite the fun and silliness of the former trope's namer takes on the classic "spooky" setting and Christmas Town, the other holiday place. Not to be confused with Halloweentown, a made-for-TV Halloween Special by Disney, though it is itself an example.