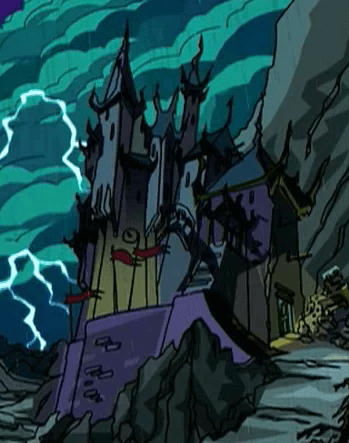 This is the article for the trope Haunted Castle. For the Castlevania game of the same name, click here.

On a foggy mountain peak in a spooky land looms the Haunted Castle — and who knows what manner of creature lurks within its walls? It could be some sort of vampire, Frankenstein's Monster, a Mad Scientist, the Wolf Man, a a villainous wizardess, or even Bugs Bunny. Or maybe all of them at once.

The protagonist will be driven to the castle by a thunderstorm, or by running out of gas, or by his own curiosity. In the valley below, the villagers will have warned the hero against spending the night in the castle, but he presses on into the night. His beautiful bride will question his decision, but will reluctantly accompany him.

Once the couple have arrived at the castle, the monster will take a liking for the bride. Perhaps she resembles some long-lost love of the monster, or he desires her for some mad experiment.

It will also typically be Always Night, with the sun never rising until the evil is vanquished. Expect Dramatic Thunder, Grave Clouds with a Chance of Rain, Ominous Fog, Cobweb of Disuse, Falling Chandelier of Doom, and your typical Dark and Stormy Night.

In a North American setting, instead of a haunted castle, the Haunted House will be the monster's home, since actual castles are in short supply in the United States and Canada. They are plentiful in Überwald.

Catelyn Stark details the grisly history of the ruined Ironborn castle - including the ghosts rumoured to haunt it... and the curse that has destroyed every single house to have occupied Harrenhal.

Catelyn Stark details the grisly history of the ruined Ironborn castle - including the ghosts rumoured to haunt it... and the curse that has destroyed every single house to have occupied Harrenhal.