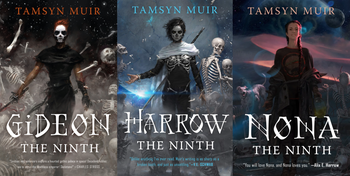 Harrow: Nav, show them what the Ninth House does.
Gideon: We do bones, motherfucker.
Advertisement:

The Locked Tomb series by Tamsyn Muir is a Science Fantasy Genre-Busting series which takes place in the far-future Empire of the Nine Houses, a galaxy-spanning empire of necromancy. The Nine Houses revolve around their Emperor and God, who brought his Houses back from death in the Resurrection 10,000 years ago. The Nine Houses of God's domain are varied and rich in history, filled with dark necromancies and powerful lineages, and constantly jockey for political favor.

The series centers on two young women from the Ninth House, the smallest of the Emperor's houses, located in a dark shaft cracked into the core of a dead planet, which safeguards and worships the eponymous Locked Tomb. The Tomb contains the greatest enemy of the Empire, a foe so dangerous that God himself could defeat it once, but not twice.

Gideon Nav is a foundling who was taken in by the Ninth, and has tried to escape the decrepit and abusive House since she was four years old. Holding her back is the Reverend Daughter Harrowhark Nonagesimus, an exceptionally powerful necromancer and Gideon's lifelong tormentor. When a summons comes from their Emperor and God, they get bound up in the greater conflicts of the Empire and are forced to confront the tangled and broken relationship between the two of them.

Books in The Locked Tomb series

All individual character tropes should be placed on the Characters page.

The Locked Tomb series as a whole provides examples of: