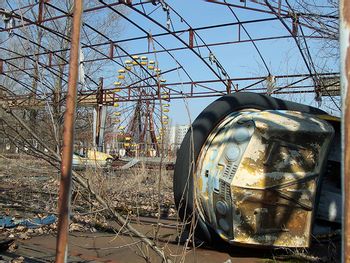 This town is coming like a ghost town...
Sally Sparrow: I love old things. They make me feel sad.
Kathy Nightingale: What's good about feeling sad?
Sally: It's like happy for deep people.
— Doctor Who, "Blink"
Advertisement:

Abandoned places make good settings for fiction. Normally seen in fiction that evokes types of horror, the concept of a place just being abandoned makes an unnerving feeling in the viewer. It also creates suspense and increases the surprise when it turns out that the place isn't really abandoned. The use of abandoned places as an aesthetic aid, as it normally is, often overlaps with Scenery Gorn. Abandoned areas can considered an example of a small scale After the End scenario, especially if the area in question is trashed and some buildings are either in ruins or are due to crumble. Depending on the state of the location, it may give a justified example of No OSHA Compliance, because, really, would you be bothered with health and safety in somewhere you've abandoned?

Also see Never Recycle a Building. Beautiful Void is a related trope. Any of these can be Unexpectedly Abandoned. See also Bat Scare, which is frequently used in abandoned areas. When a part of a city has been so abandoned that even the police won't go in, you have The City Narrows. (Robert A. Heinlein used the term "Abandoned Area" in I Will Fear No Evil to refer to that part of a city.)