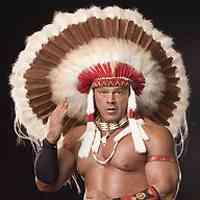 "Many moons ago, I made a promise to my people to climb TO THE TOP of the World Wrestling Federation!!!"
— Tatanka, putting the "axe" in Careful with That Axe
Advertisement:

Chris Chavis (born June 8, 1961), aka Tatanka, is an American professional wrestler, who rose to prominence in the early 1990s on the strength of his on-screen persona, which heavily played up his Native American heritage; in fact, he is actually descended from the Lumbee Native American tribe. He was a popular upper midcarder in WWE, and held a famous undefeated streak for a year and a half. After it ended, he had a Face–Heel Turn in 1994 and spent time as a Mook for Ted DiBiase before departing the company.

Chavis spent time on the independent circuit after having turned down a contract from WCW, preferring the lighter schedule. In the mid-2000s, he had a short-lived comeback in the WWE.

While he never held a title in WWE, he has held gold all over the world. Among his in-ring achievements, he is a former USWA Unified World Heavyweight Champion

Tropes associated with THE UNDEFEATED NATIVE AMERICAN, TATANKA~! include: