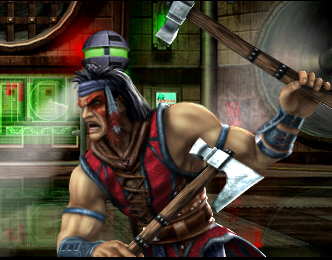 "Don't plan to bind or banish ya, old ghost. Just gonna kick your ass up between your ears."
— Joseph "Injun Joe" Listens-to-Winds to Shagnasty,note Joe hands Shagnasty his ass in the ensuing battle Turn Coat
Advertisement:

Many indigenous people have a tradition of war. So of course they're badasses. No matter what era you're in, if you live in the Americas, Oceania, or sub-Saharan Africa, indigenous people will be badasses. Rarely seen in the rest of the world, though. The American version of the Badass Native tends to wear Braids, Beads and Buckskins. Will often be magical.