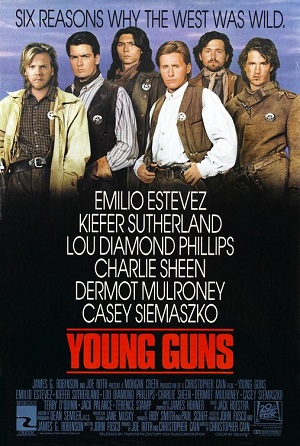 Young Guns is a 1988 Western action film featuring an All-Star Cast in a dramatized retelling of the adventures of Billy the Kid during the Lincoln County War, which took place in New Mexico in 1877-1878.

William "Billy The Kid" Bonney (Emilio Estevez) is a young man who's hired by a cattle rancher named John Tunstall (Terence Stamp) in Lincoln County, New Mexico, to protect his property as one of his "Regulators." After a disagreement with a fellow rancher named Lawrence Murphy (Jack Palance) results in Tunstall's death, Billy and several other men working at the farm, including Richard Brewer (Charlie Sheen), Gordon "Doc" Scurlock (Kiefer Sutherland), Jose Chavez (Lou Diamond Phillips), "Dirty" Steve Stephens (Dermot Mulroney) and Charlie Bowdre (Casey Siemaszko), convince Tunstall's friend and lawyer Alex McSween (Terry O'Quinn) to deputize them and let them get revenge on one of Murphy's men.

The newfound group of deputies handle the situation by shooting Murphy's man and a group of his men without arresting them. What follows is a collision course as the six men run afoul of the local law enforcement, Murphy himself and the army, while the populace grows to respect and idolize their exploits. Many of the newfound outlaws die along the way as they try to evade the authorities and carve out an existence for themselves.

The film proved popular enough to warrant a sequel, Young Guns II, which was released in 1990. A third film with Estevez, Sutherland, and rest of the cast is currently under production.

Though the films played very fast and loose with a lot of the details of the Lincoln County War and Billy's role in it, they are nonetheless held up as one of the better retellings in modern times.