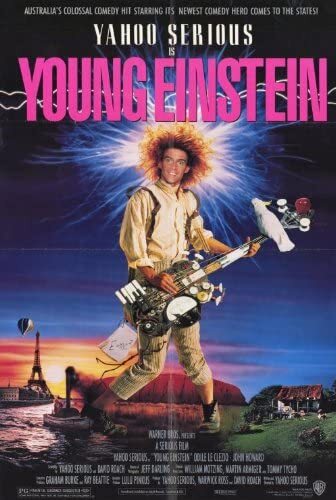 Based on a true story.
Young Einstein is an intentionally inaccurate portrayal of Albert Einstein as the son of an apple farmer in Tasmania in the early 1900s. In this movie, Einstein splits a beer atom (with a chisel) in order to add bubbles to beer, discovers the formula for energy and travels to Sydney to patent it. Here he invents the electric guitar and surfing and comes up with a theory of relativity while romancing an anachronistic Marie Curie. He invents rock and roll and uses it to save the world from being destroyed due to misuse of a nuclear reactor under the watching eye of a similarly inaccurate Charles Darwin. Um... yah...
Advertisement:

Written, directed and starring Australian musician Yahoo Serious note  born Greg Pead , the film was created due to Yahoo's interest in Einstein's life after visiting the Amazon River. The film was made on a very small budget, even going so far as forcing Serious to sell his car to gain funds for it. The film was a hit in its home country of Australia and had modest success in the United States as well, making it the second-most successful Australian film upon its release.

Not to be confused with Little Einsteins. Entirely unrelated to Young Frankenstein, except that both are ridiculous comedies.