Film / You and Your Stupid Mate 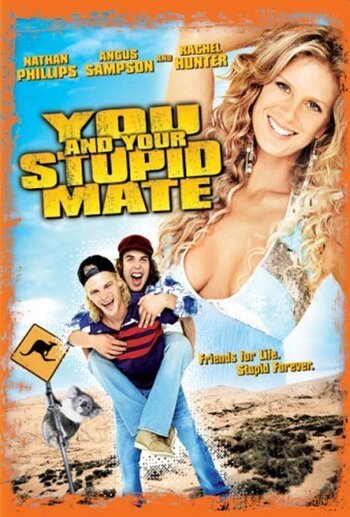 You and Your Stupid Mate is a 2005 Australian comedy film directed by Marc Gracie.
Advertisement:

Jeffrey (Angus Sampson) and Philip (Nathan Phillips) are two dimwitted best friends who live together in a caravan park in Melbourne. Jeffrey runs the unofficial fansite for Soap Within a Show Sons and Surf, while Philip acts in the local Gang Show

, and both pine after their neighbor Karen (Rachel Hunter). But their happiness is ruined when they receive three pieces of bad news in one day: Peter Rossiter (Rock Hampton), who works at the unemployment office, is forcing them to work for their benefits, Sons and Surf is about to be axed, and their caravan park will be bulldozed to make room for a freeway. Jeffrey and Philip go on a quest to solve those problems.

You and Your Stupid Mate contains examples of: