Never Heard That One Before 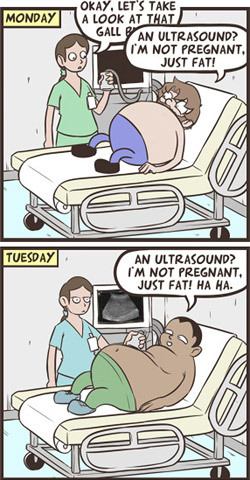 This is the usual response most people have when they hear a comment or joke they've heard a million times or more; particularly when said remark has long since stopped being funny, and moved past tiresome. (The trope name is an instance of Sarcasm Mode, in case you couldn't tell.) For instance, when a person mentions Aquaman, they might mention that he talks to fish and nothing else. The reaction of a comic fan? "Gee, I've never heard that one before".

The recipient of the joke may also simply say, "It wasn't funny the first hundred times."

A variant is when a person can tell that his/her new acquaintance is just dying to drop that line, and says with resignation some variant of "Go ahead; just say it. I know you're thinking it." Other times, the character may silence the other with a Preemptive "Shut Up" before they can even utter said line.

Often subverted by having a character who really has never heard that joke before.

Truth in Television: This happens in Real Life to people with distinctive or Unfortunate Names, names linked to something with pop cultural significance or, Heaven forbid, a Punny Name. Or another obvious distinguishing feature: for example, working at a company that has the same name. Can lead to anger if done too frequently or the wishes of the person on the receiving end to cut it out already aren't respected. The person who says this may be a Phrase Catcher or have a Real Joke Name.

Compare Discredited Meme and Never Live It Down.