Visual Novel / The Curse of Kudan 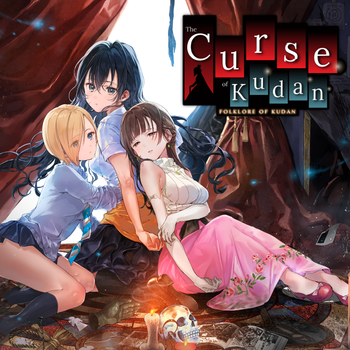 "Hey, do you know the 'Kudan' urban legend?"
Advertisement:

The Curse of Kudan (originally called Kudan no Folklore in Japan) is a Yuri Genre visual novel created by SukeraSparo. It was originally released in 2019 as a Japan-only game, but eventually got a remastered version in 2020 that is also localized in English, simplified Chinese, and traditional Chinese.

The story follows Sakuya Kudan, a high school student at Kudan Girls' High School. One day, she runs into a cooking teacher named Touko Shima and decides to enroll in Touko's cooking classes to get to know her better. However, she soon finds out that Touko has run afoul of the urban legend known as "Kudan." According to rumors, Kudan appears as a one-handed woman in a Western mourning dress. If you lay eyes on her, you will encounter misfortune after seven days.

Helped by her childhood friend Karen Azuma and the young president of the Occult Research Club Koto Akinashi, Sakuya attempts to discover the truth behind the Kudan urban legend.

The Curse of Kudan contains examples of: