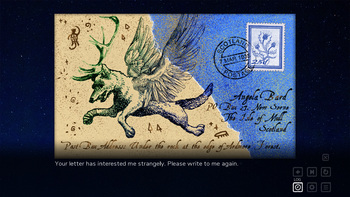 Post Box Address: Under the rock at the edge of Ardmore Forest.
"I suppose I should start with a short summary of my life. I don't really feel like doing that, so I shall skip to the present."
— Angela Bard
Advertisement:

The year is 1935. It all started with a single letter. But from that point on, nothing would remain the same for Angela Bard—a quiet, solitary woman living in the Scottish isles.

Much to her surprise, she receives a mysterious and strangely esoteric reply from an unexpected source...

Who is Devere? And how can he be sending letters from the forest at the edge of Angela's town?

Dear Devere is a mystery romance Visual Novel told through a letter correspondence. It's written and illustrated by Katy133 and made in the engine Ren'Py.

The game is available for free on itch.io here.

Dear Devere has also be given a release

Being a mystery visual novel, spoilers will be contained in the tropes. It's recommended that you play Dear Devere before reading on. You Have Been Warned.