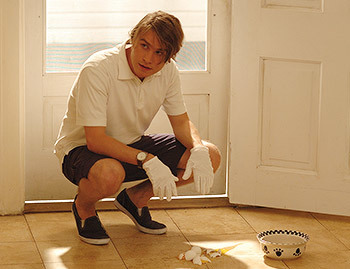 Are they for cleaning?
"In the first place," she said, "a REAL WITCH is certain always to be wearing gloves when you meet her. [...] She has to. Do you want to know why?"
"Why?" I said.
"Because she doesn't have finger-nails. Instead of finger-nails, she has thin, curvy claws, like a cat, and she wears the gloves to hide them."
— The Witches, Roald Dahl
Advertisement:

Gloves are a curious accessory. For participants in some occupations (medicine, construction, gardening) and sports (boxing, riding), gloves are essential or at least recommended. They're also commonly worn in cold climates or seasons, and in some historical periods, social customs require people to wear gloves. Most of the time, however, the wearing of gloves is unusual, and it's even more unusual for a person to wear only one glove.

When this trope is operating, a character is depicted wearing a pair of gloves (or a single glove) without the excuses of occupational demands, low temperatures, or social custom. If the glove is worn only on one hand, it is always the same hand. Wearing the gloves will set the character apart from others in the work, and there's generally a plot-relevant reason for their presence. Most often, the gloves serve to conceal something about the wearer, though occasionally they're worn for protection and/or style. The gloves might be worn to conceal a Red Right Hand, hide an injury, cover a prosthesis, disguise a social stigma, commit crimes without leaving fingerprints or simply to indulge personal preference. A common use in crime dramas is to use gloves to conceal the race and/or gender of the villain while showing the crime being committed.

May be put in focus with a Menacing Hand Shot.

Similar to Sunglasses at Night, wearing a glove or gloves at all times is both cool and conspicuous. It may overlap with Tricked-Out Gloves or High-Class Gloves. Compare the White Gloves that animated characters wear to accent their hands.