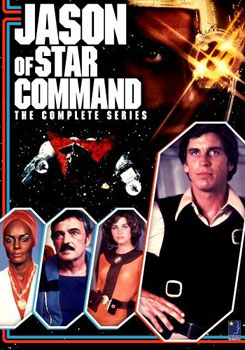 A live-action Saturday morning children's show on CBS, created by Filmation in 1978, Jason of Star Command harkened back to the 1930s Flash Gordon movie serials, appearing in its first season in 15-minute installments coupled with a cartoon short, and in its second season as self-contained half-hour stories.

Each episode featured Jason (Craig Littler) battling the evil Emperor Dragos (Sid Haig), as the latter tried to destroy Star Command, a base hidden in an asteroid that publicly housed the Space Academy from the previous series. While the show was never very good, it did have some impressive budget model work and even some Stop Motion Animation.