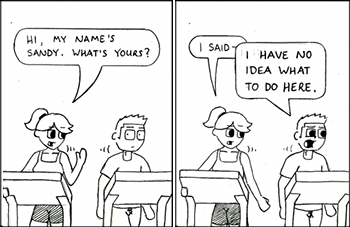 For some reason, the character is mostly ignorant of and often confused by common social conventions and behaviors. They usually grasp enough to minimally function around other people most of the time, but any circumstances outside of their limited experience fluster, puzzle, or (at worst) upset or enrage them.

Someone with no social skills is not necessarily stupid — just unfamiliar with how human beings act around each other. Consequently, they will tend to be blunt, straightforward, and Brutally Honest. They will expect everyone else to be totally honest, too. From a writing point of view they are an asset: they say things that everyone is thinking but no one would dare say out loud.

One background that can lead to this trope is to be Raised by Wolves — growing up with animal parents. They may be an intellectual (from a nerd, up to an Absent-Minded Professor) who thinks more about their favorite subject than interacting with people. Alternatively, they may have had an isolated or abusive childhood or Sacrificed Basic Skill for Awesome Training. Or all three. They may be bamboozled by the opposite sex and ask What Is This Thing You Call "Love"?. Alternately, they may have had social skills in the past, but after being away on The Quest or some other mission for an extended time, may find themselves unable to reintegrate due to being a Shell-Shocked Veteran or a Stranger in a Familiar Land.

Quite often a point is made of stating that this character is very intelligent or "learns fast" to make sure the audience doesn't just write them off as dense and to justify characters trying to help them adjust, or as an excuse for why they've adjusted as well as they did. If done poorly, either of these versions of intelligence can become an Informed Ability.

An extreme form of Fish out of Water, milder cases may result in Cloud Cuckoo Lander, Creepy Child, Innocent Fanservice Girl or No Sense of Humor. Homeschooled Kids are usually portrayed this way. If they stay this way, they may become The Hermit, The Shut-In, or Hikikomori.

Related to: Friendless Background and I Just Want to Have Friends when the character isn't happy about this situation.

In Real Life, people with dyssemia

fit this trope. It's a symptom of certain forms of autism, including Asperger Syndrome; a differently wired mind can make it hard to grasp neurotypical social cues, which can give the unfortunate perception that Loners Are Freaks.note Though it should be noted that this goes both ways - neurotypical individuals have difficulty interpreting autistic social cues as well, and contrary to popular belief, autistic people are just as capable of conveying information as their neurotypical counterparts

. This is called the double empathy problem

. Media is aware of this but tends to exaggerate its prevalence and intensity. A mild form is also common in people involved with academia. That said, No Real Life Examples, Please!

Compare Not Good with People, where a character has more of an affinity for non-human lifeforms. Also compare Socially Awkward Hero. Contrast with The Social Expert.