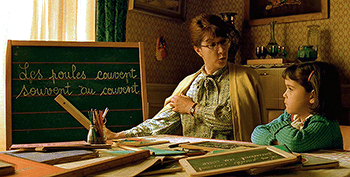 Connie: And I can come over all the time now that it's summer vacation.
Steven: What's summer vacation?
Connie: You know, when school gets out for the summer?
Steven: I've never been to this... how do you say... school? How does it work?
— Steven Universe, "Mirror Gem"
Advertisement:

To many modern children and teenagers, the homeschooled kid is something of an enigma. Do they ever leave their house? Is there something wrong with them? How do they make friends if they can't go to school? And that most offensive of questions: do they have lives?

Despite popular belief, homeschooled kids are typically no different than kids who go to regular schools (such as public schools or private schools). While some kids are placed in special schools due to things like disabilities, a good number of their parents feel that their kids' educational needs will simply be better met at home. Homeschooling can come in many forms, from literally being taught by a parent to a co-op that hires teachers for their kids.

Usually, when homeschooling does come up, it is either by having a stereotypical homeschooling character introduced or by having the main characters attempt homeschooling themselves. Usually, neither turns out well. Occasionally the Moral Guardians will be pro-homeschooling. The Final Boss of a Spelling Bee is often a homeschooled character.

Examples of attempts at homeschooling: