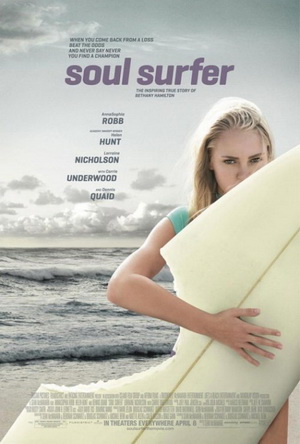 Soul Surfer is a 2011 American biographical drama film directed by Sean McNamara, based on the 2004 autobiography Soul Surfer: A True Story of Faith, Family, and Fighting to Get Back on the Board by Bethany Hamilton about her life as a surfer after a horrific shark attack and her recovery.

Bethany Hamilton (AnnaSophia Robb) is a teenager who lives in Kauai, Hawaii who loves surfing. One day, she and her best friend Alana Blanchard (Lorraine Nicholson) go surfing with Alana's father and brother. As Bethany dangles her left arm in the water, a tiger shark appears out of nowhere and bites off her arm near the shoulder.

Soul Surfer is one of two films that follows the effect of the shark attack on Bethany's personal life and her surfing career. The second, an autobiographical documentary titled Bethany Hamilton: Unstoppable was released in 2018.