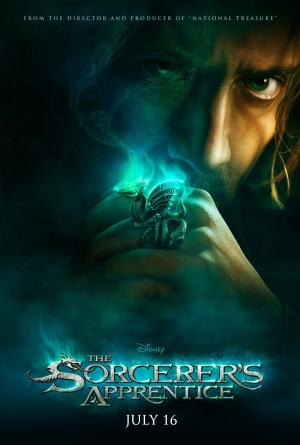 Dave Stutler: How do you know my name?
Balthazar: Because I can read minds! ...It's on your backpack.
Advertisement:

The Sorcerer's Apprentice is a 2010 film produced by Jerry Bruckheimer, distributed by Disney and directed by Jon Turteltaub (of National Treasure fame).

Centuries ago, the great wizard Merlin trained three apprentices: Balthazar Blake (Nicolas Cage), Maxim Horvath (Alfred Molina), and Veronica (Monica Bellucci). However, Horvath betrayed them to Morgana LeFay (Alice Krige), resulting in Merlin's death. In the aftermath Veronica and Morgana ended up trapped in an artifact known as the Grimhold, in which Balthazar later manages to trap Horvath. With his dying breath Merlin tasked Balthazar with finding his heir, the Prime Merlinian, who can end Morgana's evil forever.

Centuries pass with Balthazar travelling the world, hunting down evil sorcerers and seeking the Prime Merlinian, until the year 2000 when he finally finds him in the young Dave Stutler (Jay Baruchel), a boy living in Manhattan. Unfotunately, Horvath escapes just long enough to force Balthazar to trap them both for ten years. In 2010 both Horvath and Balthazar escape. Horvath seeks to release Morgana once again and now Balthazar has to track down Dave and teach him the magic arts.

The whole thing was largely Nicolas Cage's idea, wanting to expand upon the classic Mickey Mouse cartoon short from Fantasia. The film even has a full scene dedicated to it.

Just keep in mind that if something doesn't make sense, A Sorcerer Did It.

Completely unrelated to the direct-to-video 2001 film of the same name, which was given the RiffTrax treatment.

The Sorcerer's Apprentice provides examples of: