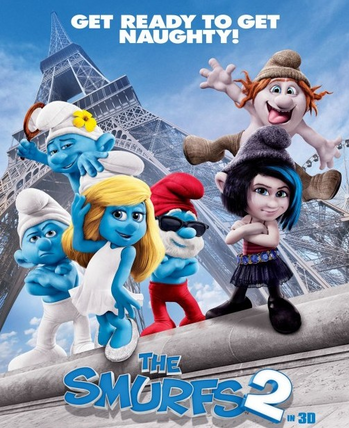 The second edition of the proposed Live-Action Adaptation trilogy released on July 31, 2013. Like its predecessor, the movie is produced by Sony Pictures Animation and distributed by Columbia Pictures. Raja Gosnell also directed it.
Advertisement:

In the movie, Gargamel is filling venues around the world as a big-shot magician in our modern world. Unfortunately for the wizard, he's running out of Smurf essence for his shows so he creates Hackus and Vexy, a couple of evil Smurf-like creatures called "Naughties" in hopes to turn them into real Smurfs, only to discover Smurfette and Papa know the formula. So while the wizard preps for his Paris Opera House debut, he sends one of his creations into the land of the Smurfs to smurfnap Smurfette.

Speaking of which, while all the male Smurfs prepare to throw Smurfette a surprise birthday party back at Smurf Village, Smurfette wonders why she's the only femalenote ignoring Sassette, Clockwork Smurfette and Nanny Smurf, none of whom show up in the movie and may not exist in the movie's continuity while wandering through the woods when she's smurfnapped by Vexy and both rejoin Hackus and Gargamel, where Gargamel hopes to use the Eiffel Tower as an energy-generating antenna to finally return home.

Smurfette's kidnapping prompts Papa, Clumsy, Grouchy and Vanity to follow them back to the modern world and seek help from Patrick and Grace Winslow and their son Blue along with Patrick's stepfather.

This film is notable for being Jonathan Winters' last acting role before his death.

Due to its performance in theaters, Sony decided to cancel the third movie in the trilogy and instead reboot the series as an all-CGI animated movie series with its next movie Smurfs: The Lost Village in 2017.

The teaser can be found here

and the first trailer is here