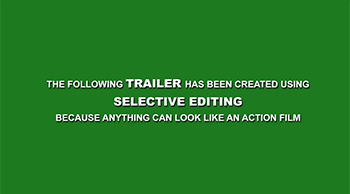 for the second season of our Echo Chamber web series.
"Considering what we get, it's highly possible that Movie Trailer Voiceover Guy also sells billions of dollars worth of used cars and swampland real estate every year."
— The Agony Booth on

If Covers Always Lie, trailers can, too. Sometimes Tonight, Someone Dies or hyping The Reveal might not be enough. And with the Internet an open window these days for writers and directors to viewers' likes, dislikes, hopes, predictions, and Shipping loyalties, it's easy to know exactly how to bait fans into watching the next episode. Be careful not to believe everything you see, though, because as all Fan Vid makers know, any scene can be mixed-and-matched with another to look completely different from their real context.

Of course, Tropes Are Tools, as used correctly this can be a very clever way of averting Trailers Always Spoil (by not mentioning or downplaying the real main plot).

Indeed, the creation of fake trailers to make a movie look like it's from a completely different genre has become one of the Internet's most beloved recent art forms, such as The Shining as a family-oriented romantic comedy

, Elf as a thriller

, or the one that started it all, The Ten Commandments (1956) as a high school romantic comedy

Another way it can backfire is if you can't find enough good footage to make a decent trailer, audiences can extrapolate just how bad the rest of the material must be.

If it sounds too good to be true, it usually is.

Often a form of Misaimed Marketing (it's been said that trailers reflect the movie the studio wanted to make, rather than the one that actually got made). If it's a TV show's Title Sequence that lies, those are Bait-and-Switch Credits.

open/close all folders
Advertising
Comic Books
Fan Works
Theatre
Web Animation
Web Comics
Web Original
Dishonest as it may be, you gotta admit that it is kinda funny, too.
Feedback