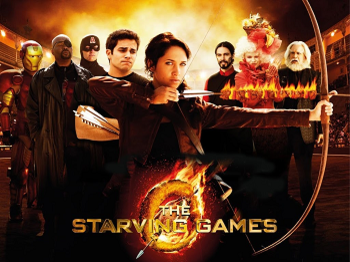 Imitation is the cheapest form of comedy.
"Instead of spoofing movies that came out two weeks ago, they decided to spoof movies that hadn't even come out yet. This becomes painfully obvious when the "jokes" amount to simply recreating moments from the trailers and TV spots. Ultimately, this movie should have been called 2008 Movie, because it seems the main requirement for being spoofed here was being released in 2008."
— Albert Walker

Good parodies have different levels of accessibility, stretching from popular, new stuff to older classics. With a smaller pool of things being parodied, writers will feed on more generalized tropes.

The Narrow Parody occurs when the writers are afraid the target audience might be too young (or just too stupid) to catch the expected references, and have no concept of Parental Bonus (though there would still be demographic parental bonuses such as references to recent adult media in children's media or even crossovers between them), so they just narrow the field down to things made in the last few years. This can work against the writers, as works hailed as "classics" make for good parody, while fluff often doesn't. In many cases, the parody itself is also painfully obvious and laboured, going for the cheap laugh rather than trying to make any kind of point about what is being parodied.

If done poorly, the parody aspect seems more like a cover for ripping off the most recent movies, as sometimes there's nothing particularly iconic about the things being parodied. Much of this depends on your definition of "narrow".

These works are almost always doomed to become Unintentional Period Pieces. See also Small Reference Pools. Sometimes overlaps with Shallow Parody, which is so badly researched that it gets vital details wrong and/or substitutes generic jokes in place of actual parody.