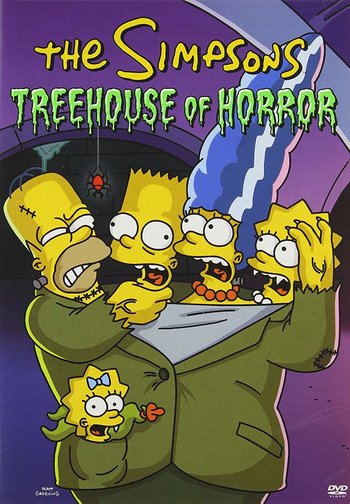 These specials aren't canon.
Remember that, you'll repeat it to yourself quite a lot while you watch them.
"Hello, everyone. You know, Halloween is a very strange holiday. Personally, I don’t understand it. Kids worshiping ghosts, pretending to be devils. Things on TV that are completely inappropriate for young viewers. Things like the following half hour! Nothing seems to bother my kids, but tonight's show, which I totally wash my hands of, is really scary. So, if you have sensitive children, maybe you should tuck them into bed early tonight instead of writing us angry letters tomorrow. Thanks for your attention."
— Marge Simpson, introducing the first Treehouse of Horror.

These are The Simpsons' special annual Halloween Episodes. Earlier installments have the onscreen title of The Simpsons Halloween Special. Every season but the first one has had one.

The specials are anthologies of three short stories with a horror theme (there are exceptions, though, simply for the sake of Negative Continuity), all Played for Laughs. The first episode had a Framing Device of the Simpson children telling scary stories in their treehouse, hence the name. The next three had different framing stories (respectively, Homer, Bart, and Lisa having nightmares after eating too much candy, telling scary stories at a Halloween party, and a parody of Night Gallery), but from the fifth onward, they were cut because of time constraints and the fact that the writers couldn't think of any good framing devices for the stories.

Many of the tales feature Affectionate Parodies of contemporary Horror Films. Others are inspired by more traditional horror — there is even a Dramatic Reading of Edgar Allan Poe's "The Raven" in the first "Treehouse" episode.

In 2001, Fox Interactive, Software Creations, and THQ Inc. released The Simpsons: Night of the Living Treehouse of Horror for the Game Boy Color, which saw the Simpsons going through levels based off of the classic segments.

An annual Treehouse of Horror comic book is also published by Bongo Comics, and is considerably Darker and Edgier.