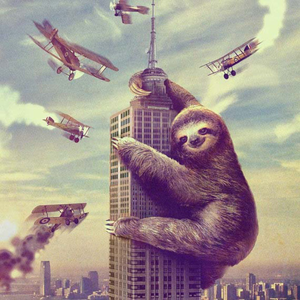 Worst part is, it took him three hours just to get up there!
Advertisement:

A Stock Parody or Stock Shout-Out, sometimes both, where circumstances somehow conspire to re-create the singature ending of King Kong (1933).

In the original film, King Kong famously grabbed the female lead character, played by Fay Wray, and climbed up the Empire State Building while planes circled overhead, shooting at him. The iconic image of the giant ape climbing the tall building has since wormed its way into pop culture and frequently attracts parodies and homages.

So thanks to King Kong, giant apes in fiction have a tendency to grab screaming women and start climbing tall buildings while being attacked by airplanes. Of course, there are lots of other ways to riff on it. Some common variations: You could have a normal-sized monkey climb a scale model of a tall building. You could flip things around and have a Giant Woman carry an ape up a tall building. And it works with any Kaiju-sized creature too, not just giant apes.