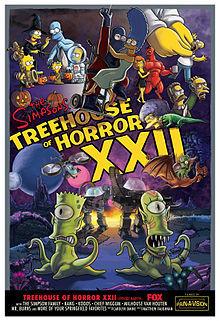 Homer uses the power of flatuence to communicate with people after getting paralyzed by a spider bite in "The Diving Bell and The Butterball," Flanders becomes a murderer for the Lord in "Dial 'D' for 'Diddly'," and Bart and Milhouse pose as the natives on an alien planet in order to steal a rare element in the (rather dated) Avatar parody, "In the Na'vi."