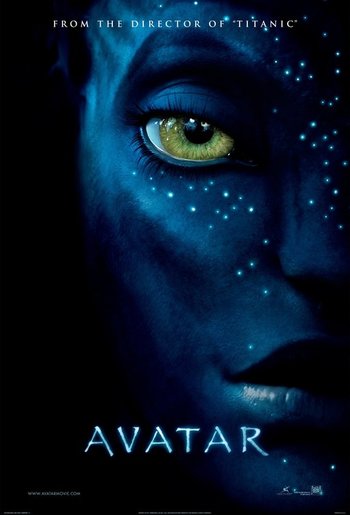 Enter the world....
"This is why we're here. Unobtainium. Because this little gray rock sells for $20 million a kilo. That's the only reason. This is what pays for the whole party, and it's what pays for your science. Those savages are threatening our whole operation. We're on the brink of war, and you're supposed to be finding me a diplomatic solution. So use what you've got and get me some results."
— Selfridge
Advertisement:

The film takes place in a future where Earth is a polluted Crapsack World, though the story itself unfolds on Pandora, a large moon of the planet Polyphemus in the Alpha Centauri A system. The planet's air is toxic to humans, but it has lots of Unobtainium note Seriously, that's what it's called as an in-joke; most viewers miss the single line in the film in which it is revealed that the characters in the film intentionally chose the name ironically., which the human Resources Development Administration is mining, but in order to get at the richest source of it, they need to relocate a clan of the native population; ten-foot-tall, blue Humanoid Aliens called the Na'vi who live in the forests.

A paraplegic former U.S. Marine named Jake Sully (Sam Worthington) is given a remotely-controlled Na'vi body called an "avatar" in order to communicate with the Na'vi and gain their trust, but the resident General Ripper Colonel Miles Quaritch (Stephen Lang) has other ideas and wants to remove the Na'vi by force. Jake ends up torn between his humanity and the adopted Na'vi way of life, made harder by his growing bond with Neytiri, The Chief's Daughter (Zoe Saldaña).

James Cameron first got the idea for Avatar in The '90s and wrote an 80-page scriptment for it, but he shelved the project because he felt that the special effects technology at the time was insufficient for portraying Pandora and its inhabitants adequately, particularly in regards to translating actors' faces to CGI. Thus, he spent the time between Titanic and Avatar creating smaller products as he developed these technologies and amassed a large budget for the movie.

The film is also notable for using a form of stereoscopic 3D for filming. The film's incredible financial success led to a surge in interest for 3D films; indeed, Avatar stood for a decade as the highest-grossing film of all timenote In raw numbers at least; adjusted for inflation it's 2nd behind Gone with the Wind, before eventually being overtaken by Avengers: Endgame in 2019 (although it reclaimed the title in 2021).

A sequel, now titled Avatar: The Way of Water, has been in the making for the better part of the following decade, since Cameron (as usual) was interested in utilizing experimental technology to portray new environments (specifically, Pandora's oceans), taking a few years to improve it. Production finally began in September 2017. Currently, there are four sequels planned for release starting in December 2022. Cameron is set to write and direct all of them. Alleged titles for further sequels include Avatar: The Seed Bearer, Avatar: The Tulkun Rider, and Avatar: The Quest for Eywa respectively.

A third-person action video game James Cameron's Avatar: The Game was released in 2009. The game acts as a prequel to the movie and Sigourney Weaver, Stephen Lang, Michelle Rodriguez, and Giovanni Ribisi reprise their roles from the film. Ubisoft has also announced the open-world Avatar: Frontiers Of Pandora for 2022.

Dark Horse Comics published a comic book Avatar: Brothers for the 2017 Free Comic Book Day and the six-issue series Avatar: Tsu'tey's Path, written by Sherri L. Smith and with art by Jan Duursema, in 2019. The next series was Avatar: The Next Shadow written by Jeremy Barlow and with art by Josh Hood.

Mega Games published Avatar: The Board Game in 2010.

In late 2019, after going through Development Hell for a few years, Avatar: Pandora Rising, a massively multiplayer online strategy game for mobile devices, launched in its early access stage.

No relations to Avatar: The Last Airbender, or any other meanings of the word "avatar".

Jake Sully: Well, uh, I guess this is my last video log. Whatever happens tonight, either way, I'm not gonna be coming back to this place. Well, I guess I better go. I don't wanna be late for my own party. It's my birthday, after all. This is Jake Sully signing off.