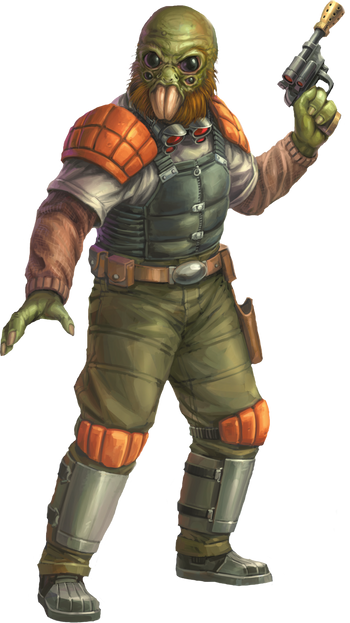 There are Human Aliens which are indistinguishable from humans (at least on the outside appearance). Then there are Rubber-Forehead Aliens, which look like humans but with some minor differences.

Then there are Humanoid Aliens that have the general shape of a human, but definitely look nothing like us. Be it a different number of fingers, different skin, feathers, whatever. Only similarity they need is one head, two arms, two legs, and a generally upright stance, tail and/or wings optional. Any further deviation from the humanoid form is likely to result in Starfish Aliens.

Like Human Aliens and Rubber-Forehead Aliens, the prevalence of this trope — in live-action TV in particular, though also in movies and comics and other primarily visual media — is a Necessary Weasel through and through. It has a lot to do with the need to create something that human actors can comfortably portray (without going way overbudget with CGI, that is), that human artists can conveniently and quickly draw, and that human viewers/readers can intuitively empathize with. It also helps that these aliens tend to stay farther away from the Uncanny Valley than more human-looking aliens, and are thus less frightening. The point is: realism is hardly ever the author's intention when this trope comes into play, which leads to it often being eschewed by Hard Science Fiction authors whenever possible.

That's not to say there aren't those who defend the scientific merit of this trope, however. Many cite convergent evolution

— the theory that similar environments lead to the development of at least vaguely similar anatomies. Now, admittedly, it is true that the basic humanoid shape of two walking appendages topped off by an upright center of mass, then a pair of manipulating appendages, and finally a head equipped with a mouth, eyes, ears, and a nose isn't a particularly hard one to evolve. You just grab a non-human creaturenote Who already has limbs, a head, and a distinct center of mass, of course. Though, seeing as these three things evolved independently several times in the animal kingdom, that may not be too huge of an assumption. and twist it into an upright shape. But even then, it is a bit of a stretch to expect such alien humanoids to share the same proportions and skeletal structure as a human — to not be too thin or too short, to not have backwards-bending knees, and so on. Still, something else that may be used to justify this trope is Intelligent Design.note Regardless of the controversy bringing the concept into the science fiction genre can, at times, bring. Though genetically engineered species is a variant of this which isn't that controversial. While this would not result in nearly everyone sharing a body plan like in most settings that use this trope, it is still true that if it can happen on Earth then it can happen elsewhere, so a prospective writer trying to stick to hard science fiction can still have one or two Humanoid Aliens without having to worry about filing for an Artistic License.

Contrast Our Humans Are Different, which is for when it's the humans in-story who have the strange characteristics, but they are still called humans anyway.

May overlap with Beast Man or Intelligent Gerbils. Ursine Aliens often fall under this, since bears can appear very humanoid by themselves.