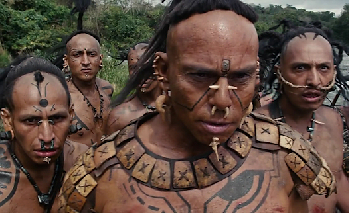 Let's say, there's a hero from the western world meeting a tribe of savages somewhere in Darkest Africa, or another part of the world far from western civilization. How do we depict that these people are savages? By showing that they're pierced.

This is kind of Truth in Television, since many real tribes use various forms of body modification as part of their culture. Before piercing became mainstream in The '90s, in the western world it was common only among certain subcultures, except for the accepted form: earrings (women only). So someone wearing rings through his or her nose (or lips, or belly buttons, or nipples, or naughty bits) must be a savage. Bonus points if we aren't talking about metal rings, but pieces of wood, or worse, bones. Often (especially in comics and animation) these will look like stock "doggie" bones, implying that these savages aren't even sophisticated enough to use tools. (In reality, stone age humans were capable of making quite delicate carved objects.)