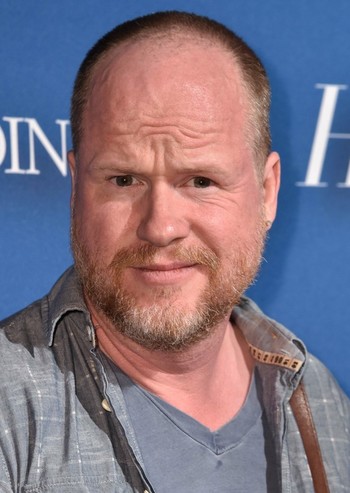 "This is my entire career in one scene: Look, she’s helpless! No, she’s kicking their asses!"
— Joss Whedon
Advertisement:

Joseph Hill "Joss" Whedon (born June 23, 1964) is a scriptwriter, script doctor, director, cameo actor, television producer through his famed Mutant Enemy production company, Comic Book author, and—as of his appearance on This American Life—a singer. He is best known for his work on Buffy the Vampire Slayer, Angel, Dollhouse, the famously-cancelled cult hit Firefly, its motion picture Serenity, Dr. Horrible's Sing-Along Blog and the first two Avengers movies in the Marvel Cinematic Universe. Coming from a family of talented writers, Joss is also notable for often being called one of the first third-generation television writers.

Most of his works include badass female characters, as well as numerous characters with dry, caustic wit. And angst. Lots and lots of angst. Even in the middle of comic storylines or situations.

In fact, Whedon delights in defying audience expectations, to the point that "Jossed" became synonymous with fan theories being disproven. For instance, rather than killing a major character, he'll kill off a minor but much more endearing character. Whedon explained in the DVD commentary for Serenity that he likes doing such things because people expect the hero to die or be horribly injured at some point — but they don't expect the minor characters to die, so the impact is much greater! Unfortunately, he's done this so often that nobody familiar with Whedon expects characters they like to live anymore.

To this day, he is also the first director / writer to have had a hand in the Marvel Cinematic Universe, DC Extended Universe and X-Men Film Series, if only by reshaping Justice League (2017) with reshoots, new scenes and repurposing of Zack Snyder's scenes for the DCEU, and script doctoring for Fox's X-Men. Since the 20th Century Fox-produced X-Men movies were discontinued following Disney's purchase of the company's entertainment assets, he may be the only creator to bear such a distinction.

In 2020, Whedon was accused of abusive behavior on the set of Justice League by actor Ray Fisher. He has since been accused of the same by a number of other collaborators including Charisma Carpenter, Michelle Trachtenberg, Amber Benson, Jason Momoa, and Jose Molina, in addition to 2017 accusations of mistreatment by his ex-wife Kai Cole. These accusations came not long after he was accused of sexually pressuring younger women who worked on his shows into affairs with him. Whedon has steadfastly denied all claims of impropriety while admitting that he can be "confrontational".