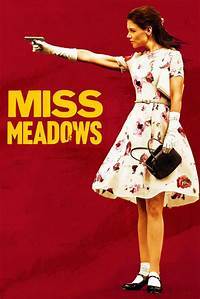 Miss Meadows is a 2014 Black Comedy written and directed by Karen Leigh Hopkins and starring Katie Holmes. The titular character is a prim and proper but really quirky young school teacher. At the same time, though no one suspects, she's also a vigilante, making the world nicer through killing criminals. As the bodies pile up, the local county sheriff begins investigating. His path crosses with Miss Meadows, and the two fall for each other, with him being initially wholly unaware that she's the person he's seeking.