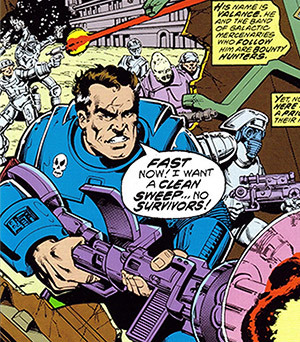 "Wipe this pathetic planet from the face of the galaxy!"
— Darth Malak, Star Wars: Knights of the Old Republic
Advertisement:

Stock Phrase of a villain that signifies a Kick the Dog, especially if the victims are (comparatively) helpless. If the villain isn't the one directly causing mass murder or ordering his mooks to do it, then he's shown giving this instruction to a Psycho for Hire or Hitman with a Heart. The naval expression for this is "No Quarter". In Real Life, it's a war crime.

Of course, if a Doomed Hometown suffers this fate, then it's more likely than not that the hero escapes such a culling and goes on a Roaring Rampage of Revenge.

Sink The Life Boats is the subtrope dealing with killing enemies who were alive after surviving the destruction of a vehicle.

Compare, contrast with Shoot Everything That Moves and Rocks Fall, Everyone Dies. Going one step further from "kill everyone" to organized torture, looting, and massacre of the population is Rape, Pillage, and Burn. If you have to kill everyone because they saw too much, that's Leave No Witnesses. When this fails, it often falls into the category of Genocide Backfire. See also Traumatic C-Section and "Everyone Dies" Ending.