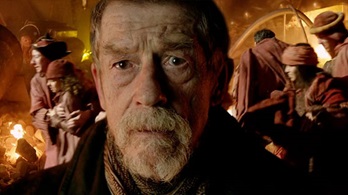 "If you have been inside my head, then you know what I've seen. The suffering."
"There's only so much fight in a person. Only so much death you can take before..."
— Commander Shepard, Mass Effect 3

War Is Glorious? Not to this guy.

, a real condition note  the name is from World War I, where it was thought that the concussive force of artillery shells exploding caused the condition. Hence the soldiers were "shocked" by artillery "shells" that participants in a war commonly acquire, but that can also be caused by a multitude of other means, often involving high-stress situations.

In fiction, this character went through hell and he has done things that no amount of (fictional) therapy will heal, and it's left him so irrevocably scarred that he has trouble feeling, emoting, or caring about the people around him and even oneself. If he continues to feel anything, it's usually restricted to Survivor Guilt. Thus he's usually the first to do what must be done and Shoot the Dog. Most Shell-Shocked Veterans will, at some point or another, be seen exhibiting the classic Thousand-Yard Stare; with a blank, emotionless expression and unfocused, empty eyes. The war clearly never ended for him.

If the Shell-Shocked Veteran is out for revenge expect him to become an Antiheroic Hunter of Monsters, with varying degrees of success and sanity. Many a Zen Survivor has elements of the Shell-Shocked Veteran in his Back Story, though the Shell-Shocked Veteran is likelier to eventually prove he's a Jerk with a Heart of Gold or a Knight in Sour Armor. Expect him to have a Sympathetic Murder Backstory. They may be an Old Soldier, but are probably not a Blood Knight, and definitely not a Phony Veteran. Some may go From Camouflage to Criminal and take up a life of crime due to the mental distress they've been put under, while others step into the role of the Mentor in Sour Armor to impress on the young cadets that war is not glorious.

Sub-Trope of The Stoic. Super-Trope to The Vietnam Vet.

Compare with Heroic BSoD, Murder Makes You Crazy and Rape Leads to Insanity. Contrast Blood Knight (who is of the opposite mindset).