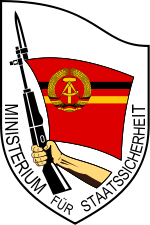 The shield and sword (well, bayonet) of the Party.
"Comrades, we must know everything."
—Stasi Chief Erich Mielke
Advertisement:

The Ministerium für Staatssicherheit ("Ministry of State Security") was the Secret Police / State Sec of East Germany. Their job was to find dissenters and torture them into becoming productive members of the state. From this emerged the most frighteningly effective and efficient secret police in Europe; and, on that note, perhaps the closest any Real Life Secret Police has come to being the Thought Police.

What especially made Stasi infamous was their decision in the 1970s to drop the old totalitarian MO of arresting and torturing dissents after deeming it too ineffective, and instead instigate campaigns of psychological harassment and manipulation of their targets straight out of the playbook of Josef Stalin's terror methods, something which also extended to their interrogation and punishment techniques where "cruder" courses of action, such as beatings and hard labor, were often foregone in favor of more insidious things, such as extremely prolonged solitary confinement or other forms of psychological torture. As an old saying goes "The Gestapo were bone breakers. The Stasi were soul breakers."

The psychological torture employed by the Stasi against political undesirables was a form of gaslighting known as Zersetzung, with the idea that it will eventually cause them to have a mental breakdown and have too little energy to challenge the government. The biggest advantage that Zersetzung gave was that its subtle nature meant that it was able to be plausibly denied.

The Stasi also took mass surveillance to new heights. To give you a baseline, the old KGB "only" had one officer for every 5,830 citizens, and its modern counterpart (the FSB in Putin's Russia) can work about 1 officer for 273 citizens (as the old KGB was spread out over the entire USSR).. The best the Gestapo could manage was one officer for 2,000 citizens. The Stasi had one officer for every 166 citizens of East Germany. And these numbers only count official full-time agents—when you include the vast numbers of East Germans who were at one time or another acting as part-time or even full-time informants for the Stasi, the number goes up to one in seven by some estimates. No one was sure if they were being watched or not, and could never tell if their friends or family were informing on them. Often people had no choice. The Stasi even went so far as having informants undergo Marrying the Mark to spy on their target spouses for years.

Despite attempts by officers to destroy them, most of the archives were taken intact after the Wall fell - the old headquarters is now a museum, as is the prison at Hohenschönhausen.

Being people of good humour, the East Germans had numerous jokes about their Big Brothers:

The Stasi in fiction:

Just about anything that takes place in East Germany has a good chance to include the Stasi.