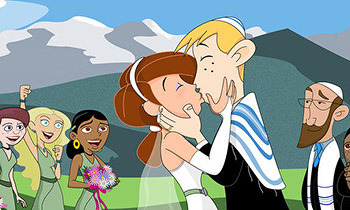 "You've got Shiksappeal. Jewish men love the idea of meeting a woman that's not like their mother."
— George Costanza, Seinfeld
Advertisement:

The tendency of some Jewish male characters in media to be paired with a non-Jewish female character ("Shiksa" in Yiddish). Typically, shiksas represent the exotic outsider to the insular Jewish community. Jews looking to break free of the bonds of Jewish society might do so through association with shiksas. A gentile partner might also be a status symbol in areas where Jews are still discriminated against. Other Jewish men might simply be more attracted to women without Semitic features─most modern Jews grow-up more exposed to the larger society's notions of beauty than to their ethnic-specific ones. Shiksas are often blonde and blue-eyed, traits more rare among Jews, to distinguish them from the Jewish norm.

The word "shiksa" comes from the Hebrew word for "abomination," as these gentile temptresses were feared to be stealing away all the Nice Jewish Boys. Like most cultures, Jewish society traditionally looks down on members marrying outsiders, seeing it as a rejection of their heritage and community. Mixed couples won't necessarily perpetuate the traditions and beliefs that bind Jewish society together. In fact, children to a non-Jewish mother aren't culturally Jewish themselves by religious law. It's a really insulting term, on par with "slut" or "whore." If one character is calling a woman a shiksa, you can bet they're not particularly fond of her.

The champion of Jewish beauty, and rival to the Shiksa Goddess is the Shayna Maidel (Yiddish slang [cf. dialectal German "schöne Mädel"], it literally means "a pretty girl", though typically applied to a Jewish woman).

The inversion of Shiksa Goddess is Matzo Fever, which is about non-Jews having this reaction to Jews.