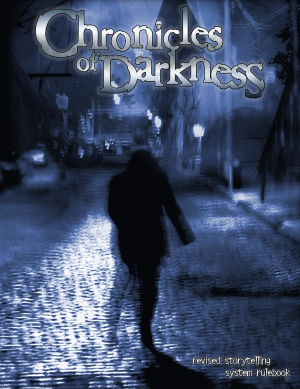 Chronicles of Darkness is a Tabletop RPG published by White Wolf. The setting is a world much like our own, albeit darker. Shadows run deeper, mysteries exist around every corner, and humans aren't at the top of the food chain. The Earth is shared with various supernatural creepy crawlies that prey on humans like cattle, kill them out of convenience, and use them as pawns in eternal conflicts.

Originally known as just The World of Darkness, the new WoD was created as a reboot for the old World of Darkness. While Chronicles of Darkness shares many tropes with the WoD it also has many differences, since it was rebuilt taking into account many criticisms of its predecessor. The biggest change was that the new Storytelling System had a unifying (though not always balanced) set of rules note In contrast with the old WoD which lacked unifying rules, a Crossover Cosmology, or Metaplot. for all the following "gamelines" to build onto. The first gameline that came out detailed ordinary humans (and ghosts in brief), while also serving as the core rule-book, creating a modular design meant that a Story Teller could run a game with all or no supernatural creatures from other gamelines. Because of this, some see the new setting as a retcon of the old, looking to fix mistakes and imbalances. Indeed, the Translation Guide series of books allows using old settings with the new rules, or vice-versa.

While no plots return wholesale, several themes, clans, institutions, and other things were ported over. The new setting is also a Crapsack World, though it focuses on hidden horrors, kitchen sink despair, and moral degradation. Once again there are three primary supernatural species: Vampires, Werewolves and Mages. There are many secondary ones: Changelings, Prometheans, Sin-Eaters, Mummies, Demons, Beasts, and Deviants. note  While some gamelines may appear as a repeat, most have significant changes. In the case of Changeling, the new game is almost the complete opposite of the old.

There's also a gameline for humans who hunt monsters. Normally in Chronicles of Darkness, a group of humans has little chance of survival when going toe-to-toe with just one supernatural creature. But most creatures agree that humanity as a whole is dangerous and should be kept ignorant of their existence. The handful of small-time monster hunter societies in Hunter: The Vigil show just how effective an organized group of humans can be. And how bad it would be to have a technologically advanced and warlike species numbering in the billions declaring open season, on much smaller populations of supernaturals. The authors even covered this scenario in Mirrors, where humanity discovers that vampires exist. (The exception is Mages who already rule the world and only hide their Ancient Conspiracy because normal humans seeing them cast spells draws the attention of the magic destroying Abyss to them.)

The modular design of CoD also created more room for homebrew gamelines, though not all of them worth the trouble, there are plenty that are worth looking into and TV Tropes has a list of fan-made gamelines here.