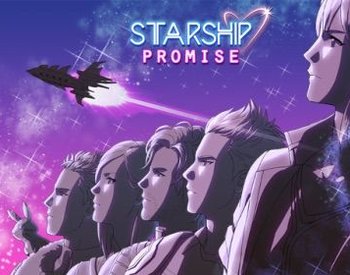 Starship Promise is a Romance Game Visual Novel by Voltage Entertainment USA, released through their Lovestruck app for iOS and Android devices.

A young engineer on the colony of Olympus 7, the protagonist has never had the chance to experience the larger galaxy outside the space station which houses her home colony. That changes dramatically, however, when she makes an unexpected discovery which draws the attention of the sinister Galactic Liberation Front onto her. Forced to run for her life when Olympus 7 is attacked, she soon crosses paths with the misfit crew of a starship named the Promise, and with them finds herself entangled in an adventure of galactic importance.

In 2020, a pilot short set in the world, A Cosmic Match, was released, featuring a new alien heroine and two potential alien love interests. Both were later expanded into full routes. Two of the original love interests, Nova and Antares, also received routes with the new heroine.