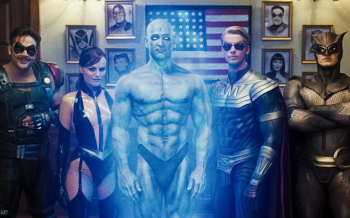 In terms of power, Dr. Manhattan tends to outshine the rest of the team's roster.
On any given Super Team, there will typically be several members with an assortment of powers, along with that one person with no powers. But what if it's the inverse? What if there is a team made up of Badass Normals with that one member being the only one who has powers? This is the Token Super.
Advertisement:

Perhaps having powers is rare and the Token Super is one of a kind, or maybe a group of powerless individuals banded together with one super individual tagging along.

The Token Super may likely serve as The Ace for the team, as having powers gives them an unfair advantage over everyone else and is likely of being the most useful member. Will often be The Hero, as justification on what makes them special. Though that's not to say there can't be a Token Super on a villain team or a Legion of Doom.