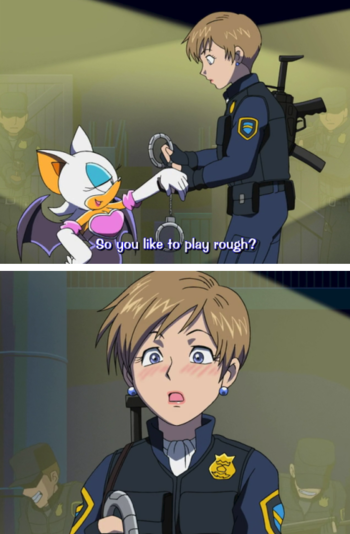 Is there something that you'd like to share with the class, ladies?
The Doctor: Why am I handcuffed...? Why do you even have handcuffs?!
River Song: [smirking] Spoilers...
— Doctor Who, "Forest of the Dead"
Advertisement:

Handcuffs work well in keeping someone from strangling or punching you, as a form of restraint. In a sense, it counts as a form of submission, since the wearer isn't really in a position to escape, particularly if they're cuffed from behind or to a bedroom stall.

It may also happen that a Honey Trap flirtatiously takes out some handcuffs, only for her target to realize once they're on that he's the latest victim of The Schlub Pub Seduction Deduction.

In some of the more ridiculous cases, kinky cuffs can be used as an Improbable Weapon. See also Casual Kink, Chained to a Bed.

She said WHAT in a kids' anime?!

She said WHAT in a kids' anime?!