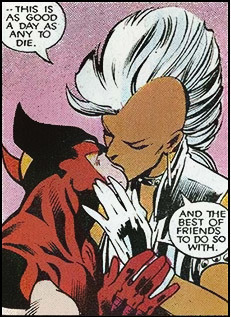 Harry: OI! There's a war going on here!
Ron: [ungluing himself from Hermione] I know, mate... So it's now or never, right?
— Harry Potter and the Deathly Hallows

The Last Kiss, except it's not the last. But the characters don't know that. Death appears imminent — the temperature is rising, the room is filling up with water, the plane is about to hit the ground, the rope they're dangling from is about to break and drop them off the cliff, the room is on fire and the door's locked, the world is coming to an end... The point is, this is no place for UST. The Not-A-Couple don't want to go out without revealing how they really feel. It's now or never. They kiss.

This can also be Now or Maybe Never; one or both are heading into danger. Can result in a combination of Fridge Logic and Facepalm if the war is raging all around them and people need help right the hell now.

Then the Big Damn Heroes burst in, save the day, and they survive to either get a Relationship Upgrade (even Glad-to-Be-Alive Sex) or insist That Didn't Happen. Often times, the revelation drives the pair to personally do something about their current situation, as they now have something to live for.

If one or both of the kissers don't survive, it's a Last Kiss. If they decide to take it a little further, it's Must Not Die a Virgin.

A sub-trope of Dying Declaration of Love.