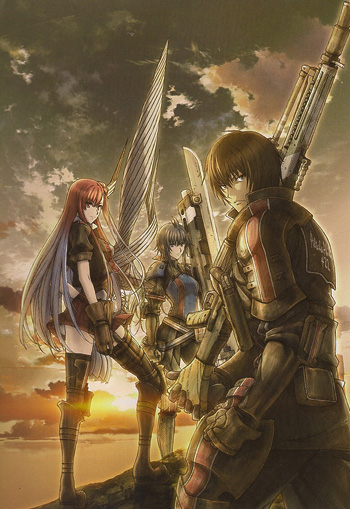 "The tale of the nameless soldiers who, on the verge of despair, changed the course of history."
Advertisement:

Valkyria Chronicles 3: Unrecorded Chronicles is the third game of the Valkyria Chronicles series, released in Japan on the Playstation Portable on January 27, 2011. Despite the previous two games getting localized, SEGA announced no localization would be made for this title outside of Japan. Unlike previous titles, this game was developed by Media Vision and published by Sega.

Taking place during the events of Valkyria Chronicles, the game tells the story of Gallian Army Squad 422, otherwise known as "The Nameless". Made up of criminals, deserters and military offenders, the members of the Nameless are stricken from official records and thereon referred to by number only. They are then sent out on the most dangerous missions and dirty work for the Gallian Army, their existence and actions officially denied by the government.

The three main characters are No.7 (Kurt Irving), an army officer seeking redemption after being falsely accused of treason; No.1 (Imca), a Darcsen heavy-weapons specialist who seeks revenge against the Valkyria who destroyed her home; and No.13 (Riela Marcellis), a kind-hearted soldier who was dumped into the Nameless after her tendency to be the Sole Survivor gave her a reputation for being a jinx on anyone she served with.

Together with the other misfits of the Nameless, they clash against a dangerous squadron known as "Calamity Raven", an Imperial black-ops unit comprised of Darcsens who have been promised independence upon victory.

. Otherwise, the voices are still in Japanese.

Two manga adaptations are available in Japan, both of them centering on Kurt's involvement in the squad with either Riela or Imca.