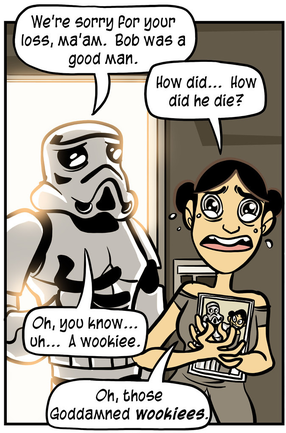 Actually, he got a crate and a TIE Fighter Force-dropped on him and got stabbed by an electrified lightsaber. But don't tell that to his wife.
Advertisement:

Whenever a movie shows the folks at home while there is a war going on, you are very likely to see this: A pair of military personnel in dress uniform, approaching the home of the soldier's family. The family will almost always know what this means.

It is worth mentioning that this job is very stressful for those tasked with the duty, as they have to constantly be the Bearer of Bad News of the worst sort.

While most common in war movies, it is also a trope tragically familiar to families of firefighters and police officers as well. When the notice is (most commonly) delivered in person, it is closely related to Due to the Dead. It would be disrespectful for the deceased's loved ones to inform them of the death through the news media along with the general public, after all. Compare to He Didn't Make It. May feature a Tragic Keepsake. If the notification is laced with white lies to spare the recipient pain or avoid tainting the deceased's memory, see The Power of Legacy.

If the notification's delivered by letter, you can expect it to take the form of a white envelope edged in black, with the paper the letter's written on having a similar design.

In some cases, this takes the form of a telegram, to the point where one will immediately guess the contents of a telegram received by a character in a wartime setting.

Obviously, this is a Death Trope, and as such there are many spoilers. Be warned.

Should not be confused with Death Note.

These examples regret to inform you: