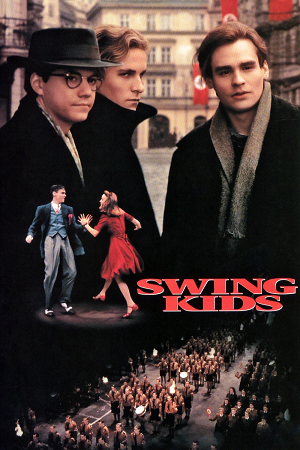 "You think that just because you're not doing it yourself, you're not a part of it? Well, I'm sick and tired of doing my part."
— Arvid
Advertisement:

Swing Kids is a 1993 movie set in Germany as Nazism is slowly growing. Most kids and teenagers are part of the Hitler Jugend. Some of those who aren't are "swing kids". Swing kids love British fashion, American dances and most of all, swing. Peter Müller is a swing kid with a passion for it. He and his friends, Thomas and Arvid, try to avoid Nazism and H.J., but after Peter is caught stealing a radio he is forced to join. Thomas joins with him for moral support, but Arvid won't hear of it and stays true to his resolve. While at first Peter and Thomas live by the motto that they're "HJ by day, Swing Kids by night," they slowly begin to get brainwashed, and they're forced to question everything they have and do believe, and must ultimately decide where their loyalties lie.

This film was a major part of the Swing fad of the 1990s.