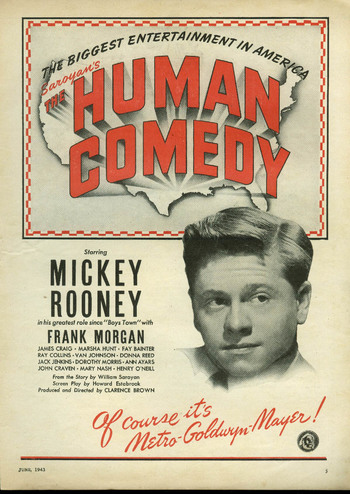 The Human Comedy is a 1943 film directed by Clarence Brown, starring Mickey Rooney.

It is the story of the Macaulays, an American family in the fictional small town of Ithaca, California, during World War II. Mr. Macaulay has passed away a couple of years before the time frame of the film, and eldest son Marcus (Van Johnson) is in the Army, waiting to go off fighting somewhere. This leaves teenaged Homer Macaulay (Rooney) as the man of the house, working as a messenger boy for the local telegraph office, trying to support his widowed mother and his sister Bess (Donna Reed), and his little brother Ulysses (Jack Jenkins). The telegraph office is owned by Tom Spangler (James Craig), who is in a romance with local rich girl Diana Steed (Marsha Hunt). Homer winds up making friends with Willie Grogan (Frank Morgan), the telegraphist, who is staring old age, obsolescence, and retirement in the face all at once.

This film is notable for featuring several up-and-coming young actors. Both Reed and Johnson had been players in B-Movies like the Dr. Kildare series, but would soon break out as big stars. And a young Robert Mitchum appears in one scene as a friendly soldier.

The screenplay was written by William Saroyan, who also wrote a novel adaptation, and released it before the film came out, leading many to believe that this film was based on the novel, when it was technically the other way around. The story was adapted again in 2015 as Ithaca, directed by Meg Ryan (in her directorial debut).