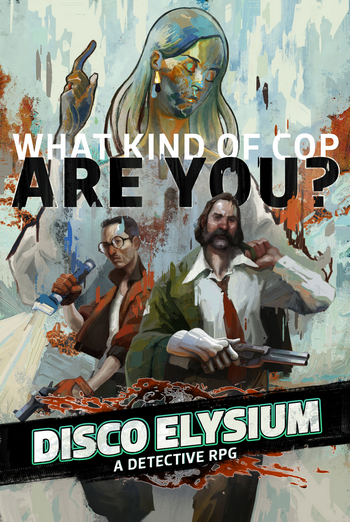 I can't recall a thing, so why do I feel so sad?
The song of death is sweet and endless... But what is this? Somewhere in the sore, bloated man-meat around you — a sensation!
Advertisement:

Disco Elysium (earlier known as No Truce with the Furies) is an Urban Fantasy Western RPG developed by the Estonian game developing collective ZA/UM, taking inspiration from detective fiction and classic Western RPGs, most prominently Planescape: Torment. It was released for PC on October 15, 2019 and on for Mac on April 27, 2020. On March 30, 2021, Disco Elysium: The Final Cut was released for Playstation 4, Playstation 5 and Google Stadia. The Final Cut was also released for Xbox One, Xbox Series X and S and Nintendo Switch on October 12, 2021.

One miserable morning, you awaken from pain and darkness in a trashed motel room with the hangover to end all hangovers. You have no idea where, or even who, you are, but some details begin filling in as you explore: you are a police detective visiting Martinaise, harbor district of the the city of Revachol, jewel of the Insulindian Isola, in the year '51 of the current century. Perhaps most importantly, you were sent here three days ago to deal with a lynched corpse, but instead went on a deranged bender of drug and alcohol abuse.

Now, you must resume the investigation with the aid of Lieutenant Kim Kitsuragi, a fellow detective from a rival precinct. But of course, it won't be as simple as it seems — the victim, a security contractor for a major international shipping company, stands at the center of a major dispute between the local dockworker's union, corrupt businessmen, communist agitators, and foreign interests, with blood on the streets looking more likely by the day. All of them are eager to use you for their own ends — and of course, you're no titan of mental stability, what with the two dozen voices in your head vying for your attention...

As the set-up may convey, the game places less emphasis on combat (there isn't even a dedicated combat system to speak of) and more on dialogue, finding clues, and exploring Martinaise and the coast. The game's tree of 24 skills also stands out, focusing on the inner workings of your mind, your thoughts, feelings, opinions, memories, ideas, and beliefs, any of which may provide the key to getting through to a witness or suspect and eventually cracking the case. Skills are not only constantly being tested, passively and actively, but are characters in their own right who react to your choices, offer you their own advice, and argue among themselves, effectively a Player Party the detective carries around in their head at all times.

ZA/UM have hinted at plans for an expansion or sequel as well as a possible tabletop game using the Metric system the company developed for the game. In June 2020, ZA/UM announced that they had entered a collaboration with dj2 Entertainment to develop a TV series based on the game. In spring of 2021, ZA/UM released an Updated Re-release of the game, subtitled The Final Cut. It includes additional content for the game, most prominently full voice acting, an entirely new area with new characters, and four new quests based on the player character's political alignment. It released on consoles and as a free update for all owners of the PC version.

The setting was created by lead writer and developer Robert Kurvitz for the company's long-running Tabletop RPG campaign. Kurvitz has also written a novel in his native Estonian set twenty years later in the same universe, Sacred and Terrible Air. Published in 2013, the book is currently in the process of being translated into English.

The tropes are at home in the mirror — it is their address.