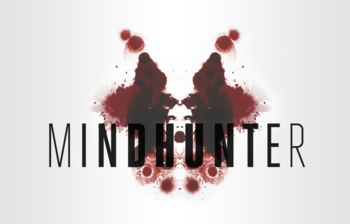 "How do we get ahead of crazy if we don't know how crazy thinks?"
— Bill Tench
Advertisement:

Mindhunter is a Netflix original series created by Joe Penhall (The Road), inspired by John E. Douglas' True Crime book of the same name. Executive producers include him, Charlize Theron, and the notoriously Serial Killer-obsessed David Fincher, who has served as the series' most frequent director and de facto showrunner, and was largely responsible for getting it off the ground after taking interest in adapting the Douglas book in 2009, which Theron had forwarded to him.

All ten episodes of the first season were released online at once on October 13, 2017. A second season was greenlit almost immediately, eventually being released on 16 August 2019. In January 2020, Netflix announced that the show had been put on "indefinite hold" due to Fincher being busy with other projects (most prominently his first Netflix-exclusive feature film Mank), but the company also emphasized in the same announcement that the series has not been cancelled.